Over the last year or two, I have repeatedly tried to ditch Chrome for Firefox.

Firefox has gotten much better over the last couple of years, and their developer team is amazing. It’s clear from talking to them that they love the web, and want to build a browser that meets the needs of their users.

However, I kept finding myself coming back to Chrome.

For JavaScript development, it has some niceties (particularly in dev tools) that I find make my work easier. I also found that I get slightly better battery life with it than Firefox (despite some people finding the opposite to be true), and pages just always felt a bit snapper in Chrome, too.

So I was really intrigued by the new MS Edge Beta browser. 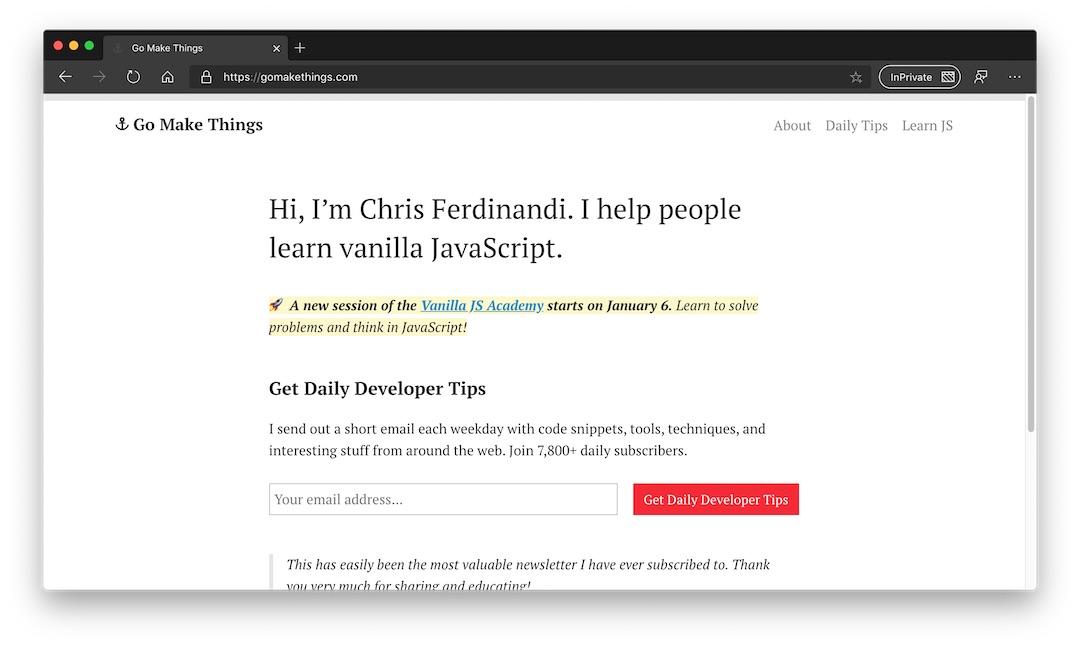 It’s built on top of Chromium, just like Google Chrome. It has a very similar UI (with a few minor differences), and the dev tools is identical. And while it has its own extension store, it can install any Google Chrome extension, too.

But there are some important differences, too.

Most notably, all of the Google spyware baked into Chrome has been ripped out. It has some UI niceties missing from Chrome, like reader mode and the ability to mute audio just by clicking on an icon in the browser tab.

And from interacting with MS Edge developers on Twitter, it’s clear that they share the same passion for an open web that serves it users that the Firefox dev team does. Microsoft has very clearly learned from their errors in the IE days.

I’d highly recommend you give the Edge Beta a look.

The official non-beta release comes out in the next month or so, but the Beta has not given me any issues so far.

I send out a short email each weekday with code snippets, tools, techniques, and interesting stuff from around the web. Join 7,900+ daily subscribers.