At QCon in San Francisco a week or two ago, James Pearce, who works in Developer Relations at Facebook, shared these stats on mobile web vs. native app usage. 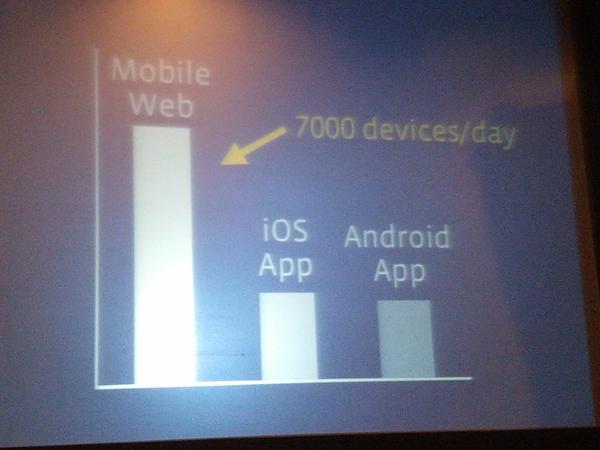 Facebook gets traffic from 7,000 devices a day via the mobile web, compared to what looks like about a third of that from both iOS and Android native apps. The Facebook app is currently one of the top 50 most downloaded apps in the Apple App Store, and is #4 under social networking. And yet they get more traffic from their mobile HTML5 website than from their Android and iOS apps combined.

Native apps are great. Personally, I’d rather use the Facebook app than visit their site on mobile Safari. But people are still going to websites, even sites they visit regularly, on their mobile devices.

If I had to pick just one to focus on first, most of the time (there are no absolutes), I’d go with a mobile-first website and then build a native app if I could. This is a great example of why.


🚀 A new session of the Vanilla JS Academy starts on October 4. Learn to solve problems and think in JavaScript! Click here to join.

Like this? I send out a short email each weekday with code snippets, tools, techniques, and interesting stuff from around the web. Join 12,400+ daily subscribers.