CSS Grid is an insanely powerful way to build layouts. But because it can do so much (and because most tutorials love to show you all the fancy stuff it can do), learning the basics can feel overwhelming.

Today, I wanted to demystify CSS Grid, and show you how to create some simple grid-based layouts with just a few lines of CSS.

As the name implies, CSS Grid operates within a grid layout: a set of rows and columns (not unlike a table).

To create a grid with CSS Grid, you specify how many columns wide it should be, and how many of those columns any particular piece of content should occupy. You can also optionally specific the number of rows, and position content very precisely on specific rows, columns, or both.

If this photo of sticky notes below were a CSS Grid, it would be three columns wide, and three rows high. 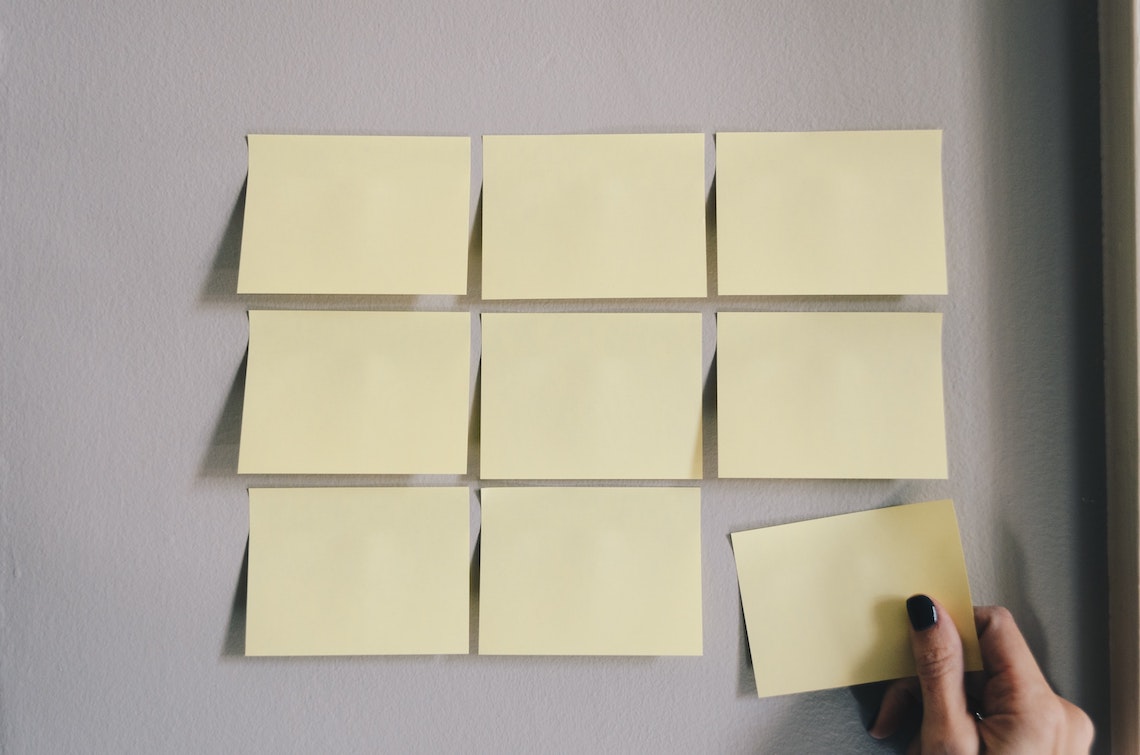 You can use all sorts of different units of measure for column widths, but the most versatile and useful is the fr, or fractional unit.

A fractional unit is equal to one column or row out of the total number of columns or rows. In the 3x3 sticky note grid above, 1fr is equal to one-third or 33.3%. In a four-column grid, it would be equal to one-fourth, or 25%. And so on.

For all of our examples, I’m going to use a variation on the markup below.

There are just three things you need to build a simple grid:

Shorthands to make this even simpler

For the grid-template-columns property, of all of your columns are going to be the same width, the repeat() function lets you repeat a column width a specified number of times.

(Yes, CSS has functions, and yes, it’s a programming language.)

The first argument is how many times to repeat, and the second argument is the value to use.

If the gap between your rows and columns should be the same value, grid-column-gap and grid-row-gap can be consolidated into a single grid-gap property.

If you’ve been around the web for a while (:cough: if you’re old like me :cough:), you might remember the “holy grail” layout: a header, footer, two sidebars, and a body of content in the middle.

It used to be a huge pain to do, then it got easier. Then everyone realized that it’s a terribly distracting layout and it’s slowly faded into obscurity.

Anyways, let’s create a “two sidebars with content in the middle” layout with CSS Grid. We’re going to use the same HTML as before, but we’ll change the class to .grid-sidebars.

So, the only thing we actually need to change is the grid-template-columns property. We’ll give it a value of 1fr 3fr 1fr.

In this example, while the layout is actually three-column grid, for math purposes it’s helpful to think of it as a five-column grid with the middle content area spanning three columns.

In this example, there are five total fractional unites, so 1fr is one-fifth of the layout, or 20%.

Again, you can see the extra columns wrapped into a new row that follows the same grid template.

CSS Grid works in all modern browsers, but not IE.

This is one that I’m 100% comfortable treating as a progressive enhancement, though. IE will get a simple, single column layout. Everyone else gets the fancy layouts.

Tomorrow, we’ll look at how to do more advanced layouts with CSS Grid.

Hate the complexity of modern front‑end web development? I send out a short email each weekday on how to build a simpler, more resilient web. Join over 13k others.